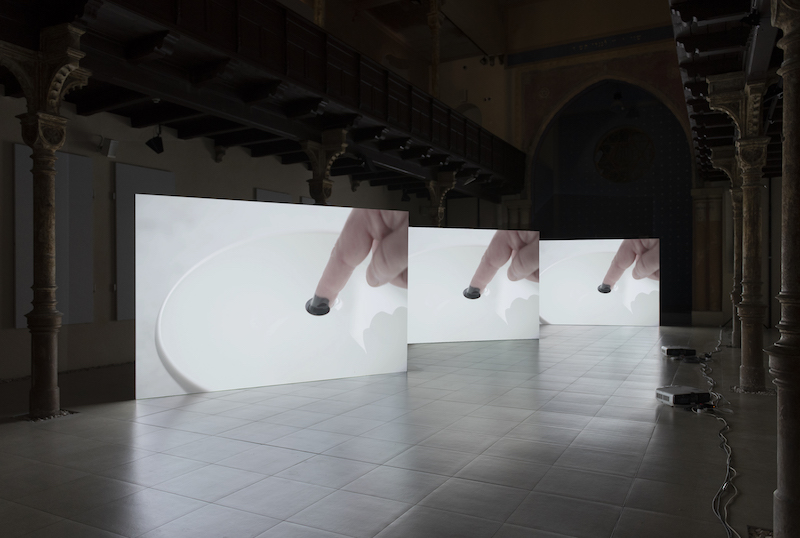 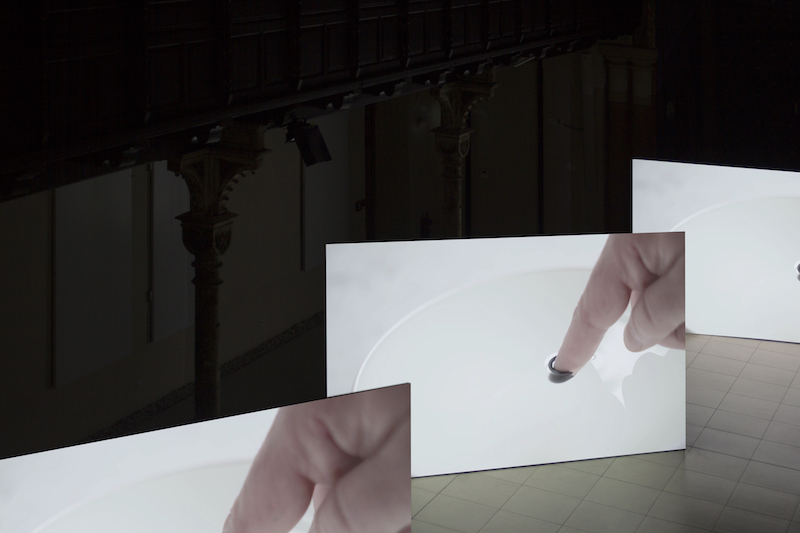 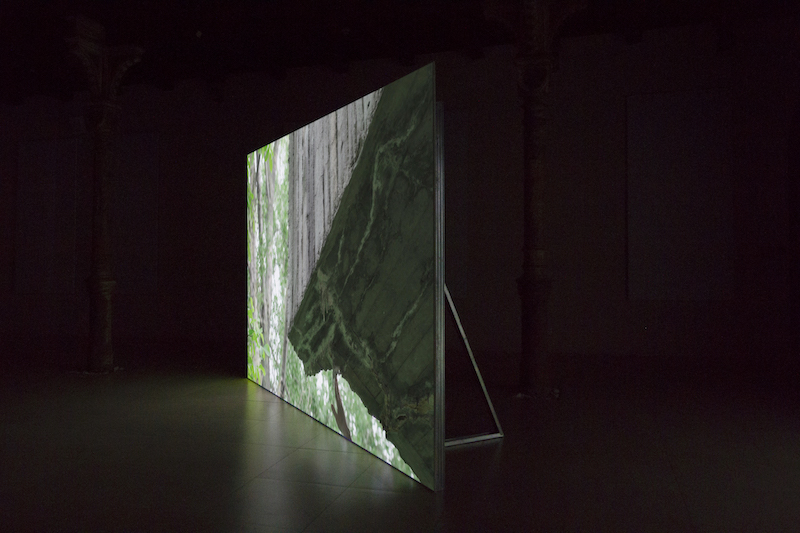 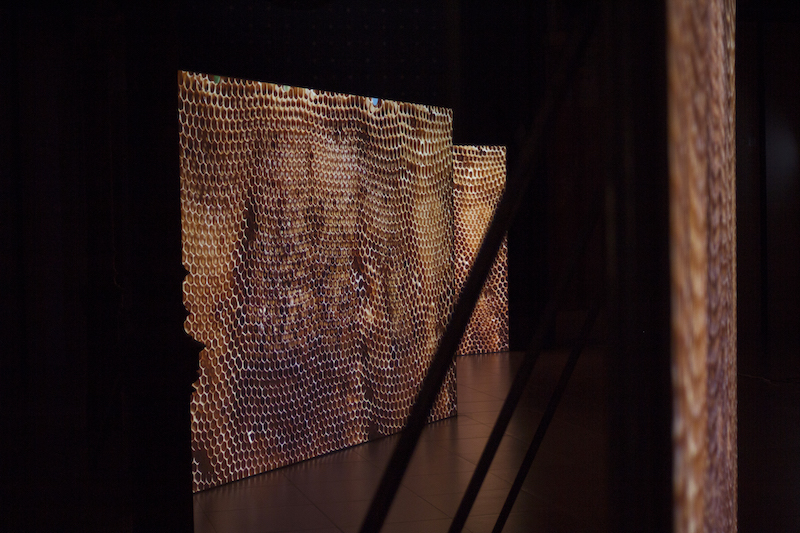 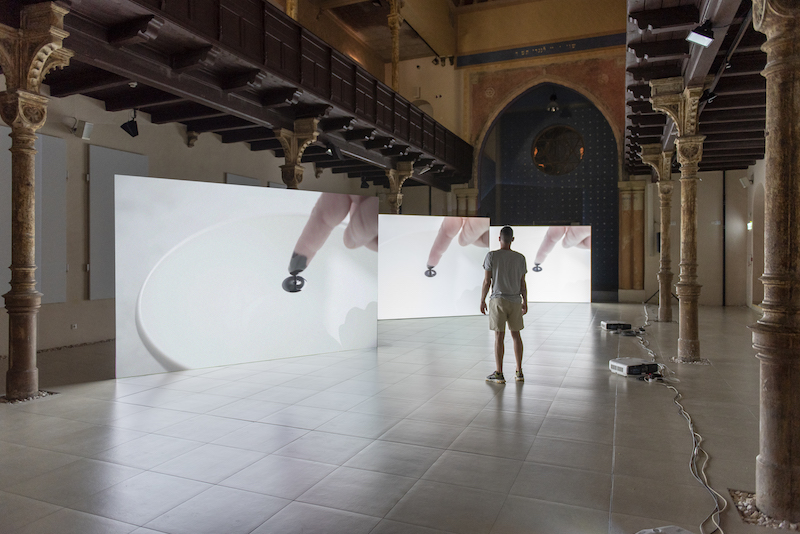 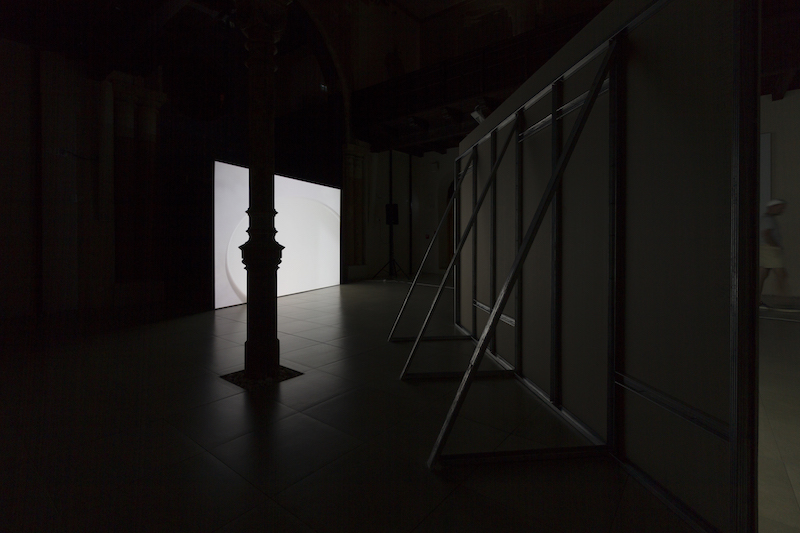 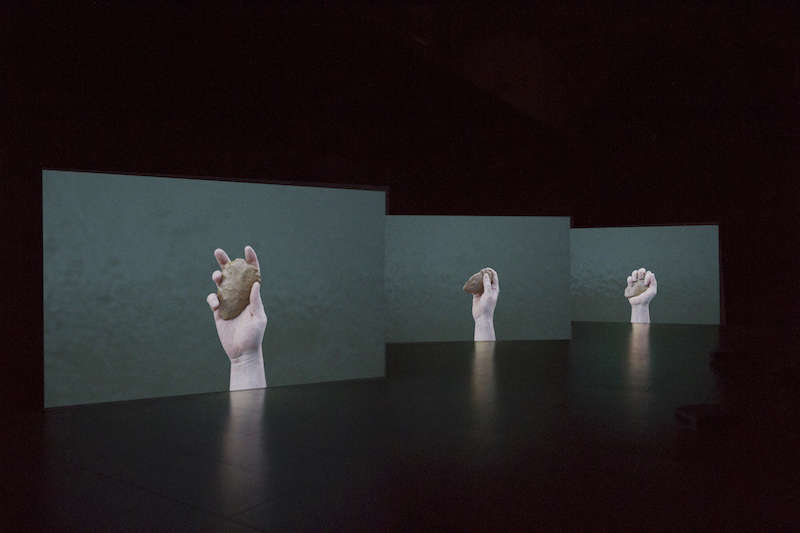 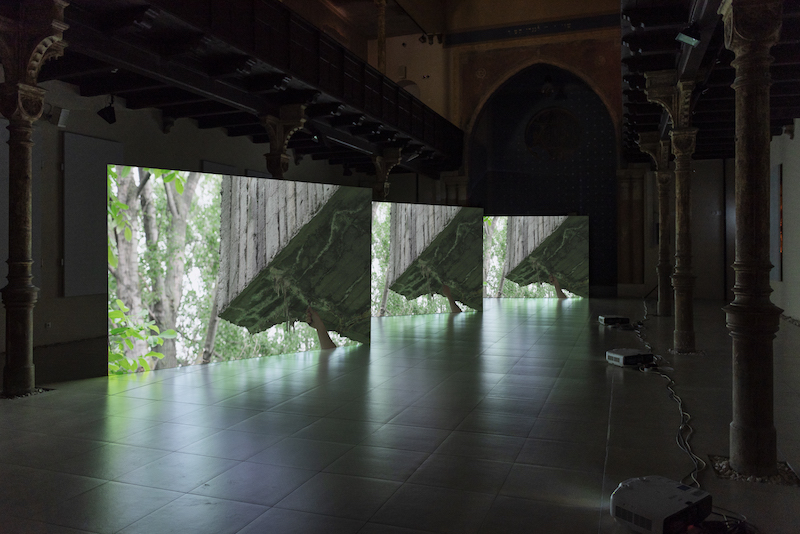 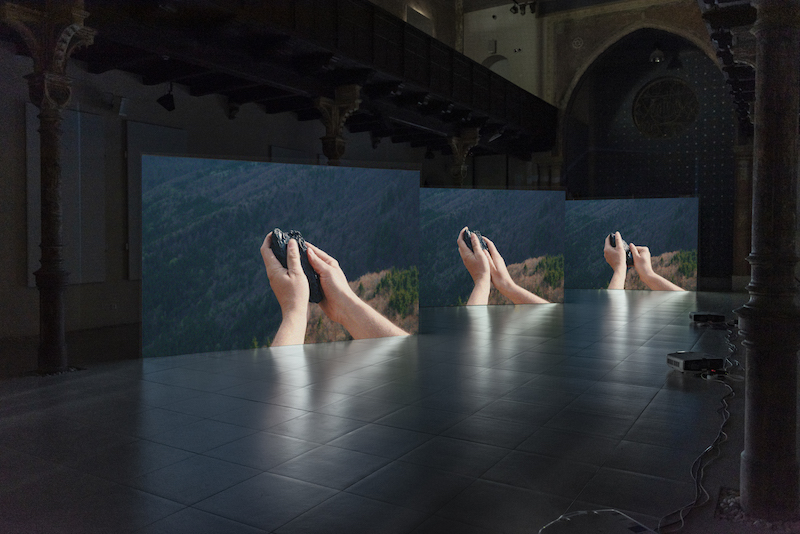 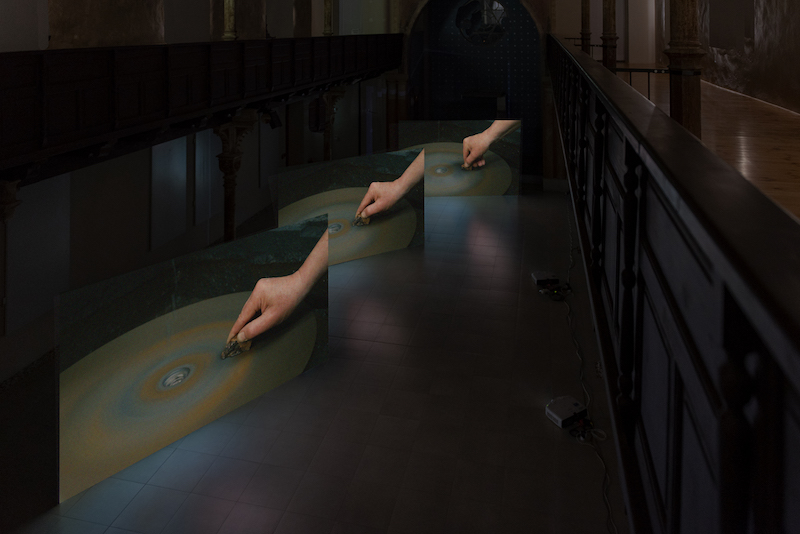 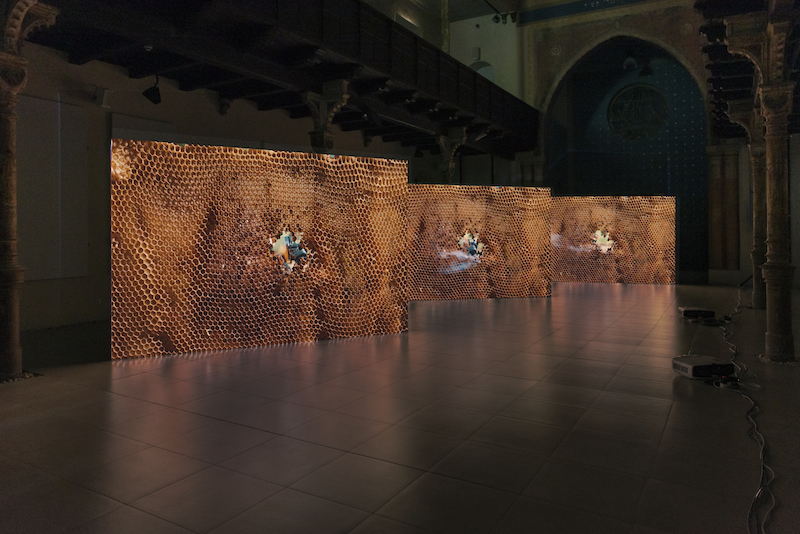 There were hardly any responses to the first mentions of the virus. Violence in geographically distant lands intensified the feeling of natural detachment and a kind of fictional reality. The first infected people and initial deaths seemed like a thing of the past taking place in reality. Here and now or there and then? Time passed and the plague spread to the Old Continent. The relative proximity of paralysed countries began to reflect the tension of everyday life. We suddenly began talking about the situation thousands of kilometres away in the present tense. Prediction graphs from other countries indicated our fate and a probable development in the immediate future. This was followed by endless expectations of the gradual lifting of bans, uncertain planning of future activities, interspersed with intense nostalgia for bright yesterdays. Our total immersion in the current time confusion has sparked the flood of live streams, virtual tours of closed exhibitions and a relentless effort to stay on the pulse of time at any cost. The pandemic has trapped us in a special time vacuum in which the difference between the past, the future and the present is suddenly negligible. Is there the present? Isn’t the past just a figment of our imagination? Are we sure that we experience the future, even though we only live in the present?

The concept of time plays an important role in the works of Slovak multimedia artist Jaroslav Kyša. His post-conceptual work with a characteristic minimalist formal input takes into account an active perception of the present, while drawing on past experience in favour of a general idea of ​​the future. Whether it was levitating objects frozen in temporal and spatial limbo or fluids denying the laws of gravity, Kyša’s works bend the timeline in a bewildering way: post-Matrix condensations in reality. He prefers using the symbolic meaning of time and historical distance when working with found (or stolen) materials (from banal objects to historical plaques, stalactites or fragments of monuments), which he destroys, transforms and integrates into new contexts. Performance gestures are an essential feature allowing him to develop a specific time element. They range from active personal interventions (in the tradition of action art) to common situations (live barricades formed by pigeons feeding themselves, overlapping the sun with a one-euro coin), to the depersonalised independence of kinetic objects and installations (robotic vacuum cleaner with a black mirror, zero meridian rotating against the movement of the earth).

The exhibition project Order of Waves in the Trnava Synagogue – Centre for Contemporary Art is based on the artist’s direct experience and continues to develop his artistic strategies. The completion of the multimedia installation was preceded by his reflections on the space of the synagogue, its historical background and characteristic architectural details. Naturally, it offered the opportunity to respond to the history and memory of this place of worship, largely filled with site-specific works selected in the period of 1995 – 2000 by curator Jana Geržová. Kyša transformed these initial considerations into a more universal project, which is still based on the historical touch with the location, but can also work outside the imaginary aura of the original Jewish synagogue. On this occasion, he decided to leave his comfort zone and experiment with the form, media or architecture of the exhibition, which functionally contrasts in shapes and materials with the historic elements of the building, decentralises the space and changes the usual views of exhibitions in the Synagogue.

The monumental three-channel video installation affects the participants’ perception. It distorts the nature of reality and the perception of the depicted. So far, Kyša has used video projections as an irreplaceable medium to document his own performances or to supplement the contexts of exhibition projects. Small video loops and simple projections formed an important integral part of the artist’s projects, but have never occupied a dominant space. This time, he superficially integrates the video, treating it as the main part of the exhibition. The collaboration with Denis Kozerawski and Tomáš Prištiak was reflected in the production and technological preparation, exceptional locations and the resulting visual narrative, which shifted his work to the field of experimental film.

The initial impression of Order of Waves exhibition recollects Déjà vu – a common psychological phenomenon associated with a particularly fascinating state, the feeling that one has lived through the present situation before. Although research has not resolved this anomaly of memory, it has proved that Déjà vu is mostly experienced by young people and decreases significantly after the age of 25. Before resorting to various paranormal contexts of visions and symptoms, it is much more interesting to feel this anomaly and perceive it as a necessary awareness of one’s own presence – here and now.

Jaroslav Kyša’s video projection explores the theme of redefinition and perception of time and questions common certainties. The confusing multiplication of the film encourages mutual comparison, the search for differences or hidden messages. The knowledge of the artist’s other work, which often toyed with the viewers’ attention, arouses the feeling of insecurity. Although it may seem that something is wrong, the typical expansion of perceived reality does not take place in this case. The projections show an identical film – what we see directly or peripherally on the first panel repeats after a brief moment on the second and then on the third projection screen. The targeted time shift of the beginnings of projections, their subsequent slowing down to achieve a perfect image synchronisation represents the first level of the artist’s manipulation with the perception of time. At one point, a simple formal shift connects the past with the future and with a sudden awakening in the present.

The experimental film depicts the artist in private minimalist performances shattering a deeply held belief about the nature and properties of the time narrative. Kyša uses various found materials and objects symbolising historical layers of time. He distorts, manipulates and transfers them to new contexts. We see a divine personification of the author/creator who makes decisions and disputes the fate and historical background of selected objects. He holds a 400-million-year-old trilobite fossil in his hand and grinds it to cause its complete extinction. In a short time, he destroys this once-living organism and the symbol of ancient history. In the next image, he considers the past and the future existence of the fist wedge. Will he destroy it or spare its life? How long did the calcium stalactite from under the bridge grow until Kyša tore it off to point out the instability of the concept of time?

At the same time, the author’s gesture draws attention to the difference between destruction in the context of artistic operation and the barbaric rage that we have witnessed in recent years. Just remember attacks of the Islamists who destroyed Assyrian sculptures and excavations in the town of Nimrud in 2015, or the irresponsible action of the Lidl supermarket chain, which destroyed the 1960s sculpture of Jozef Jankovič in Ružinov in Bratislava in 2011. The systematic destruction of the Jewish cultural heritage during the communist regime is infamously known. Apparently, the strategy of destruction in Jaroslav Kyša’s work has a more poetic character and symbolic meaning. Rather than the physical destruction of objects, he is more interested in a short-term or final change of state, using this form to communicate short video stories.

Jaroslav Kyša (*1981, Žilina) lives and works in Bratislava. He studied in the Studio of Free Creativity 3D at the Faculty of Arts of the Technical University in Košice and in the Studio of Spatial Communication + at the Bratislava Academy of Fine Arts, where he currently works as assistant to Anton Čierny. He did residencies in New York (Brooklyn Langer Residency), Leipzig (Halle 14) and Slovenia (CELEIA). In 2011 he became the laureate of the Szpilman Award, in 2017 he won the main prize of the NOVUM Foundation and was twice the finalist of the Oskár Čepan Prize (2004, 2014). His works are included in the collections of the Eastern Slovakia Gallery in Košice and in Považská Gallery of Arts in Žilina. Author is represented by Zahorian & Van Espen Gallery.